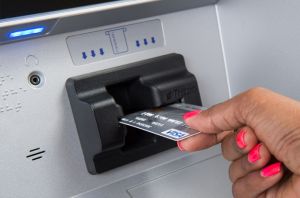 The ATM allows us to do so much more than we used to when it was first introduced. These days you can pay utility bills and traffic fines; buy prepaid airtime, mobile data and electricity; view and print detailed account statements; and makes deposits and transfers to beneficiaries. Since its inception, the concept of the ATM (i.e a single touch point used for self-service purposes that can also dispense things) has inspired other innovative ideas, some of which have very little to do with money.

Whether it’s solving a problem like the water-dispensing ATM Grundfos launched in Kenya or raising brand awareness like BMO did with their 10-foot ATM for the NBA All-Star weekend last year, the ATM seems to encourage a fair amount unconventional thinking. Here are some of the most creative ways ATMs have been used.

In 2014 the small business-focused bank TDCanada deployed a handful of ATMs across Canada that were retrofitted not to dispense cash but to give a lucky few of its customers tokens of appreciation for their continued loyalty. The ATM would speak and address the customers by name, give them a personalised message of thanks followed by a gift. The gifts varied from plane tickets, vouchers, flowers and baseball jerseys.

As a humorous way of addressing the need to be able to locate an ATM at all times, Dubai-based bank Emirates NBD launched the Awesome Travelling Machine – essentially an ATM on wheels. This ATM would roam around shopping complexes, stalking customers while they shopped. The point was to make the ATM as hard to miss as possible (as opposed to nowhere to be found). While the trend of mobile ATMs never caught on, the marketing campaign itself was a viral success.

Sprinkles Cupcakes are famously known as the world’s first cupcake bakery, but as of three years ago they’ve also been famous for being the first to introduce a cupcake ATM. The bakery’s cupcakes are so popular that the company decided to make them available 24 hours a day, even when the store itself is closed. Customers can choose their orders using a touch screen interface, pay by debit or credit card, and a door slides up revealing their cupcake.

The ATM of Happiness

Coca-Cola, the king of viral marketing strategy ideas and spreading happiness, set up ATMs all over Spain in 2013 with a sole purpose of giving away money and spreading joy. The ATMs would ask customers if they wanted €100 (approximately R1443 at the time) without inserting a card. The catch was that people had to use the money to do good, and while Coca-Cola had no way of guaranteeing that, the ATM did suggest a few ways that people could spend their money. Reportedly, the majority of them did actually perform “random acts of happiness”.

The innovation that keeps on giving

Fifty years after ATMs were first introduced and people are still finding new, exciting and sometimes wacky ways to use them. Biometric ATMs and contactless ATMs are terms that are popping up more, indicating that the ATM is far from being done reinventing itself. ATMs have even managed to position themselves as valuable advertising assets in a world where advertisers are finding it harder to keep the attention of consumers. Recently, for example, customers could redeem Uber promo codes advertised at 300 ATM Solutions installations. The promo code granted users R50 off their first trips with the ride service if they opted to pay with cash. To see what Paycorp has to contribute to the always innovative world of ATMs, download our ATM Solutions brochure below.