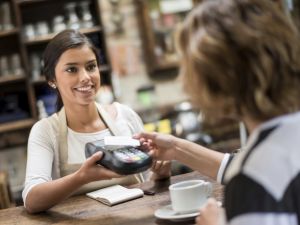 Near-field communication (NFC) – where two devices (one of which is usually a mobile device such as a smartphone) communicate with each other through close proximity – is not a new technology. The concept used to be called radio-frequency identification (RFID) technology and it has been around since the early 80s.

When it became clear just how much information can be stored and read by NFC-capable devices, the uses for the technology began to diversify, infiltrating various industries including the payments and financial services sector. Contactless payments (where the card or smartphone requires close proximity to, instead of actual contact with, the reader to transmit transaction information) continue to gain traction, so we thought we’d bring you up to speed with the most important facts to help you join the tap-and-go revolution.

Before any new payment method can even begin to be adopted, it needs to have the relevant systems and technology in place to support it. Contactless payments are no different; there are radio and electromagnetic systems necessary for reading and storing information. But because the applications of NFC technology predate contactless payments, all the necessary innovation has already happened. Credit and debit cards as well as smartphones come standard with NFC functionality these days.

While contactless payments still have a long way to go before they significantly penetrate the South African market, our bank cards are already equipped to conduct them. The latest POS systems are also designed to facilitate contactless transactions. At the moment contactless payments are limited to a maximum of R200 per transaction, but with improvements to security of the technology behind them, it could become safe to transfer larger amounts in the future.

Consumers are welcoming contactless with enthusiasm

A major barrier to any payment alternative is consumer adoption. Customers are creatures of habit and are generally unwilling to learn a new system of trading when the current one isn’t broken. However, the reflexive way in which contactless payments work has made them hard for the market to resist.

Convenience is an invaluable commodity and the market will always make space for anything that encourages it. Customers and retailers alike appreciate nothing more than speedy service and seamlessly optimised transaction processes.

Of course, with every payment method, you have to be able to ensure the security of people’s money at all times. An understandable response to contactless payments, therefore, has been “how safe are they?” Well, according to Kaspsersky, they’re just as secure as other methods of payment.

Strides in contactless payments innovations are happening at a rapid rate

The future of contactless payments already looks bright with strides being made in security innovations that will make it possible to transmit larger amounts. Wearable tech such as the Apple Watch and Barlcaycard’s bPay is the next frontier in contactless payments, further reducing the need for a physical wallet. In no time consumers will be able to pay for everything with smart rings, thanks to startups like Kerv, who have released contactless rings that require no charging and aren’t connected to your smartphone.

If you’re a retail business owner looking to tap into the contactless payments revolution, you need to arm yourself with the right POS system to be able to accept such payments.