What mobile merchants need to know about mobile payments 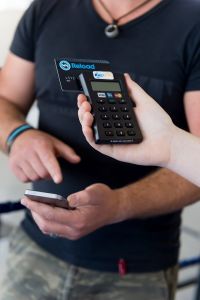 The power of digital combined with the power of mobile is a force to be reckoned with. A quick look around you, be it at work or in a mall, will demonstrate the increasing digitalisation of our world. The adoption of mobile phones defies cultural background or income level: they’re everywhere. In South Africa 89% of adults own a cell phone – that’s the same level of adoption as in the USA – data from Pew Research Center shows. What’s more, IT Web reports that market research consultants Ovum predict mobile payments to account for R83 billion in South Africa by 2017. The future is certainly bright for mobile merchants with mobile payments looking to be a surefire game changer for the a developing economy like South Africa.

It’s no wonder then that technology giants Apple and Google have jumped on board, introducing Apple Pay and Google Wallet, respectively. Although Google introduced Google Wallet in 2011, three years before Apple. The concept behind both payment systems is similar – a mobile phone is linked to a credit or debit card through a free App. The device’s Near Field Commuication (NFC) is held against a payment terminal to pay for goods: precluding the need to carry a wallet, worry about losing cards or forgetting PIN codes. So far, Apple Pay is available to mobile merchants in the USA and UK; Google Wallet in the USA alone.

Apple Pay can only be used by Apple devices, whereas Google Wallet can be used by both Apple and Android

While the concepts might be similar, there are some key differences between the two mobile payment platforms. Apple Pay is only available to those who own Apple devices such as iPhones, iPads or the Apple watch. Google Wallet, on the other hand, is available to anyone who has downloaded the App – although the “tap and pay” method can only be used on specific Android devices. Those with an iPhone 6 or higher can still use Google Wallet to send money digitally to anyone else with a Gmail-linked Google Wallet account. Although but they can only draw cash from an ATM and make in-store payments using a Google Wallet card – a free card that can be applied for online.

Whether or not Apple Pay or Google Wallet will become available in this country will be decided by the major banks. While South Africa uses the same Europay, MasterCard and Visa (EMV) standard as both Apple Pay and Google Wallet, the banks must give authorisation before anyone to whom they have issued cards can use it. If they don’t give authorisation, there is little point for Apple Pay or Google Wallet to be introduced in South Africa. This opens up a massive opportunity for other forms of mobile payments, should the banks fail to authorise them. The fact that Google Wallet is still only available in the USA four years after its inception, hints at the unlikelihood of it being realease here anytime soon.

Reloadable cards are allowing mobile merchants to offer their customers a solid alternative to the two payment methods mentioned above. Like a Google Wallet card, a reloadable card is linked to a mobile bank account, into which funds can be deposited by EFT or cash deposit. Users can transer funds between mobile bank accounts using their cell phones, as it is also possible to do with Google Wallet. It functions exactly like a credit or debit card: it can be swiped in-store or used to draw cash from ATMs. The great advantage reloadable cards have over Google Wallet or Apple Pay is that you don’t need a bank account to use them – only a cell phone number. This allows the unbanked population a safer and more convenient alternative to paying by cash.

If you are thinking of joining the thousands of other mobile merchants who are able to provide their customers with alternative payment options, download our Reload brochure or contact us for more information.